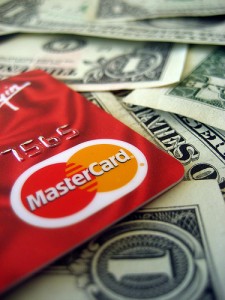 The following is a guest post from Michael Dolen of Credit Card Forum.

Even though I own and operate a message board about credit cards, I know they’re not for everybody. Just like PocketYourDollars has stated in previous posts, they are only suitable for the hyper-disciplined. The rewards and benefits can be useful as long as they don’t tempt you to spend more.

However, if they do tempt you to spend more than you can afford, then you would be better off not using credit cards at all, plain and simple, because at the end of the day, the rewards you earn with them are quite dismal in comparison to the interest rates.

So let’s say you are in the crowd that should not be using credit cards. What options do you have aside from cash and checks? Fortunately, there are a number of excellent options, some of which offer rewards and benefits which are on par with credit cards.

If you’re like most Americans, the only debit card you’re accustomed to is the plain vanilla one offered by your bank. Well, I have news for you: there are plenty of better ones out there! You just need to know where to look.

Even though the Durbin Amendment (debit fee reform) has kicked in, there are still several enticing debit reward programs which are still going strong. The most popular is probably the one offered by PerkStreet Financial, which is an online bank that was founded in 2009.

This is how it works: If you maintain a balance of at least $5,000 in your PerkStreet account, they will pay you 2% cash back on purchases. But even if your balance drops below that amount, you still get a full 1%.
https://pavg.net/wp-content/languages/new/augmentin.html

And recently they added “PowerPerks” spending categories which will earn up to 5% cash back! In short, the PerkStreet debit card program rivals even the best credit cards.

When you think of prepaid cards, the first thing that pops into your head might be the Rush Card or the short-lived Kardashian card, both of which are frowned upon because of excessive fees. Cards like those should definitely be avoided. But don’t let the bad apples spoil the barrel!

There are a few on the market which, believe it or not, aren’t a bad deal: most notably, the American Express Prepaid Card which was launched back in 2011. Is it perfect? No. But I’ll give you the run down on it and let you decide if the pros outweigh the cons:

So in a nutshell, if you use your bank account for loading the American Express Prepaid Card and limit your ATM withdrawals to one per month, it shouldn’t cost you anything (to the best of my knowledge).

Many people use the words “credit card” and “charge card” interchangeably, but technically speaking, they are actually two different things.

With a charge card, there’s no interest charged because your bill must be paid in full every month. So let’s say you charge $300 on it this month; when the bill comes, you are required to pay back all $300.

While these were quite prevalent 2-3 decades ago, you can probably guess why most banks have phased them out (because they would rather give you credit cards). However there are still a few left. Without a doubt the most well known are the American Express charge cards: Zync, Green, Gold, Premier Rewards Gold, and Platinum.

The good news is that these offer rewards and benefits comparable (and even better) than many credit cards. But the bad news is that all of these cards have annual fees since they’re not making money off of interest charges.
https://pavg.net/wp-content/languages/new/singulair.html

The lowest is the Zync at $25/year, which might not be a bad deal if you take advantage of the built-in benefits for eligible purchases like free extended warranties and 90-day coverage for stolen and accidentally damaged items.

There is one other caveat that you need to be aware of when it comes to American Express charge cards. By default they are all charge cards, but sometimes they will ask existing cardholders if they want to add a financing feature onto the account (an optional feature which allows extended payment plans on some purchases, with interest of course).Ã‚   Obviously this is a bad thing if you won’t have the discipline to say “no” when asked.
https://pavg.net/wp-content/languages/new/clomiphene.html

If credit cards cause problems for you, there are still plenty of good alternatives out there which will allow you to reap the rewards and benefits, but without the debt.

Michael Dolen is a full-time blogger about personal finance. He originally started Credit Card Forum as a hobby and over time it has grown to become his full time occupation. All of the editorial reviews and articles on his site are written by him. You can catch him on Twitter @CreditCardForum.
https://pavg.net/wp-content/languages/new/viagra.html

Your turn:Ã‚  What experience do you have with any of these credit card alternatives?