When you get married, there’s an expectation that you’ll share just about everything with your spouse. Home, memories, chores, and pets all become “ours,” and finances are no exception. However, the topic of spouses and finances is touchy—in an ideal world, love and money would have no bearing on each other. In an ideal world, we’d all be rich enough to not have to worry about where our next paycheck is coming from and going to; sharing a bank account with your lifelong partner would be no bigger a deal than sharing a milkshake.

But we are in a real world, one where money can certainly affect a relationship, for better or for worse.

We brought in personal finance expert Dyalekt to lend some guidance. The New York-based artist, podcaster, and educator is well-known for his unique approach to teaching people about personal finance through rap and hip hop. Read on for his dos and don’ts for maintaining financial wellness after exchanging “I dos.”

When It’s Time to Split Up (Your Finances)

Dyalekt: I’m married now and it’s amazing how much more intense everything gets. It’s not even multiplied. It’s like a factorial kind of thing, my math nerds. But the tough thing, the important thing, the only thing–everything–in a relationship, is communication. You want to be able to talk to each other. 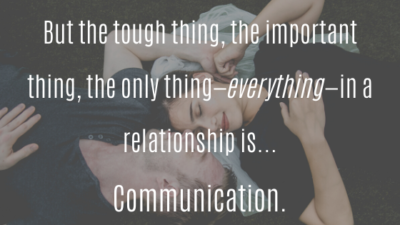 I’m not a family psychologist, so I can’t say whether or not one of these has a psychological advantage over another, but I do not have a preference for one over the others as long as you and your spouse clearly communicate about it and feel good about the way that you split it.

I know people where the spouse, the member of the relationship who is making more money feels ashamed because they’re working a job that they don’t believe in, and they think, “Yeah, my partner’s making less money than me, but they’re changing the world, and I’m just making this money.” There’s a lot of shame on both sides, when it comes to talking about this stuff. If there’s anything that a relationship is good for, it’s listening to each other and being open about what we’re ashamed of. 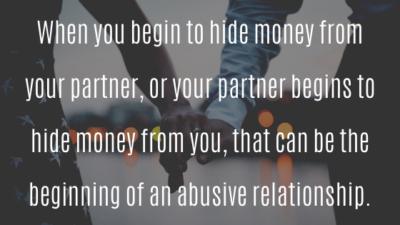 I had a great conversation on my podcast, Brunch & Budget, with Tarana Burke, the founder of the Me Too movement, talking about financial abuse. It seems like it’s very easy to hide the fact that financial abuse is going on. I have friends and family members who have been abused, and I haven’t known about it, even though I hear some details about their finances. What’s terrifying about it is that it makes sure the other person can’t leave.

10 signs of potential financial abuse in a relationship by domesticshelters.org.

The communication that you have can be rough and messy. It can be an argument, it can be something where you guys feel uncomfortable and go to places that you weren’t ready for. Those all can have healthy outcomes.

Hiding, lying, taking away people’s autonomy—these are not healthy outcomes. Even if we are afraid to start having those conversations, it’s amazingly imperative if we have any love for our partner that we start.

Starting the Conversation with Your Spouse

Dyalekt: I hate to say it, but it’s kind of easy if you’re not sharing your finances and not talking to each other to slip into a position where you both wake up and you realize, “Wow, I didn’t even think about it, but my partner has access to nothing if I were to be in a plane crash or something bad happened. They don’t even have power of attorney. They can’t even have my back if we don’t talk about it.”

I have a podcast episode called the Morbid Money Question Hour where we talked about all these scary things. People don’t want to make these inevitabilities real. I understand that it’s tough.

To be able to have this financial conversation, you need to be the one that’s vulnerable first. If you’re the one coming to your partner, and this is any gender and any type of relationship, be vulnerable. Model that and give up yourself, and you’re much more likely to have your partner be able to be vulnerable as well. It can be rough to talk to your partner and say, “Hey, I want to talk about this really tough and painful stuff. And I need you to be real with me.” Be real with them, and real will recognize real. 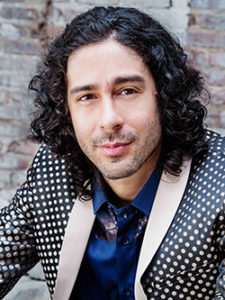 Dyalekt is an MC, educator, and playwright, usually all at once. He is based in Brooklyn, NY and has been a part of the NYC Hip Hop scene since 2003. He toured his first solo work, Square Peg Syndrome, throughout Europe, which led to him being named to The Public’s Emerging Writers Group in 2013. The album/one man show is also a 6-week curriculum on identity and literacy, piloted in 2008 in his hometown, St. Croix, USVI. He is the Director of Pedagogy for Pockets Change, a Hip Hop + finance youth organization, and has taught thousands of students. His most recent work, the Museum of Dead Words, is a Hip Hop theater show on communication and empathy in the age of the internet. He is a podcast host for the Race & Wealth Network and keynotes on how art, culture, and media are used to perpetuate racial wealth inequality.

Opinions & perspectives expressed in this article are those of the guest contributor and not necessarily Pocket Your Dollars.