How to Put Your Kids through College without Loans: One Family’s Story 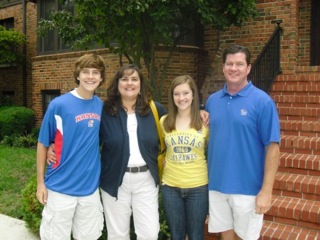 The following is a guest post by Julie Mayfield, who writes at The Family CEO.

We’re trying to do big things financially at our house. In the last 15 months, my husband and I have paid off over $46,000 in non-mortgage debt. We’re proud of that accomplishment, but we’re even prouder that we’ve been able to do it while paying for our daughter’s first two years of college in cash.

Now, you might think we had a big college savings account when we started, but that is far from the truth. We had a very modest amount put away for college, and the 2008 stock market crash cut even that small amount in half.

Still, we were committed to giving our kids the head start of a college education without student loans. Here are the things that have been helpful to us:

— An in-state school. Most in-state universities are terrific college buys. We chose a four-year school, but starting at a community college results in even greater savings.

Our daughter’s school also offers a four-year tuition compact, which guarantees that her tuition will stay the same during that time.
buy feldene generic bloinfobuy.com over the counter

That has been a big budgeting help.
buy fildena generic bloinfobuy.com over the counter

This option sometimes goes by other names at different schools, such as tuition freezes and tuition guarantees.

— Earning college credits while in high school. Our daughter was able to complete 18 credit hours while still in high school.Ã‚  These credits will enable her to finish school early, get a double major, or perhaps study abroad for a semester without extending her undergraduate education past four years. Some of her peers got college credits by testing out of some subjects with AP exams.

— Scholarships. So far, the scholarships our daughter has been able to get have covered about 75% of the cost of tuition.Ã‚  Her scholarships are academic in nature, but we’ve learned that scholarships exist for all different kinds of students, depending on their interest and high school experiences.

— A new source of income. A couple of years before the college expenses began, I started doing some writing online. That turned into a small stream of income that I began setting aside for paying for college.

The amounts weren’t large, but with a couple of years’ head start, we’ve been able to use them to stay one step ahead of college costs. Actually, assigning jobs to different sources of income like this has been a big help to us in other areas too, like paying off debt.

— Sharing the load. Not all of the expense of college is falling on us, the parents. In addition to keeping her grades up so she can maintain her scholarships, my daughter has held summer jobs and part-time jobs since she was a freshman in high school.Ã‚  She uses this money to pay for her living expenses outside of room and board. That includes things like clothes, eating out, toiletries, school supplies, and gas.

Parents and students are in a tough position. A college education is more necessary than ever before, but the costs are increasing dramatically and have been for quite some time. Ã‚  Sometimes it seems that large student loans are the only solution.

We’re trying to keep our kids from being part of those numbers. We’re working it out as we go along, but hopefully our experiences will be helpful to someone else.

Your turn: Is a college education part of the plan for your kids? What has worked for you?

In 2006 Julie Mayfield hired herself to save her family money, make extra money, and pay off debt, all while creating a life she loves.
buy Glucophage generic bloinfobuy.com over the counter

She blogs about her experiences at The Family CEO.